Titus Salt was a textile entrepreneur and philanthropist living in Bradford in the 19th century.  He was concerned for his workers health, and decided to move his mill from the murk of Bradford to a green field site on the river Aire, and, importantly, the Leeds and Liverpool canal.  It opened in 1853 amidst much celebration: 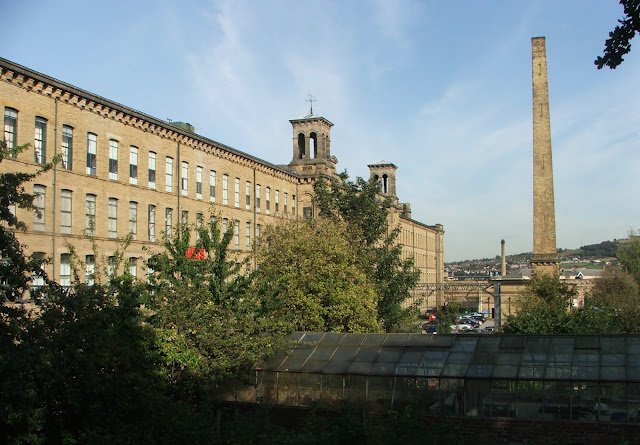 Click any image for a larger view, close by clicking X top right
Click any text in red for more info, return with your browsers back button

He also built a model village for his workers now called Saltaire, and we were lucky enough to spend a week in September 2011 in an overlookers cottage in George Street. 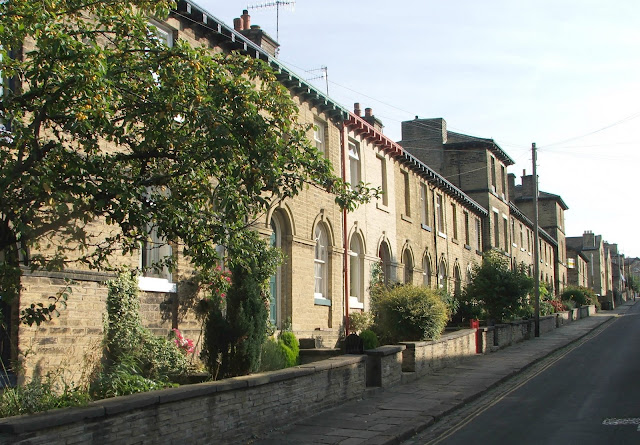 Saltaire is now a World Heritage Site.  The mill hosts an exhibition of David Hockney (updated whilst we were there) and Saltaire has an annual festival.

This log follows our exploration on bikes of the Leeds and Liverpool canal from Leeds and through Saltaire and up some amazing flights of locks. 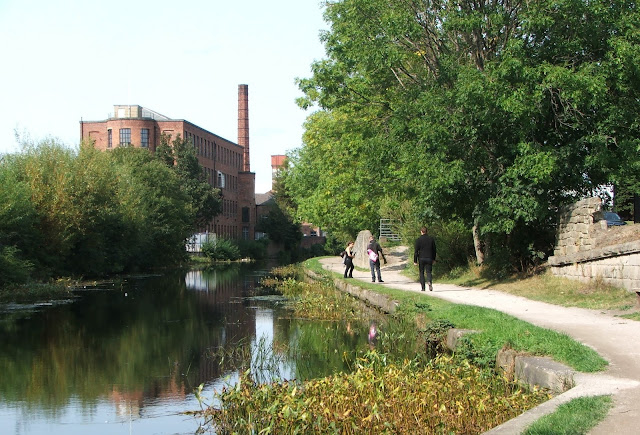 then on to Oddy lock (just two locks here): 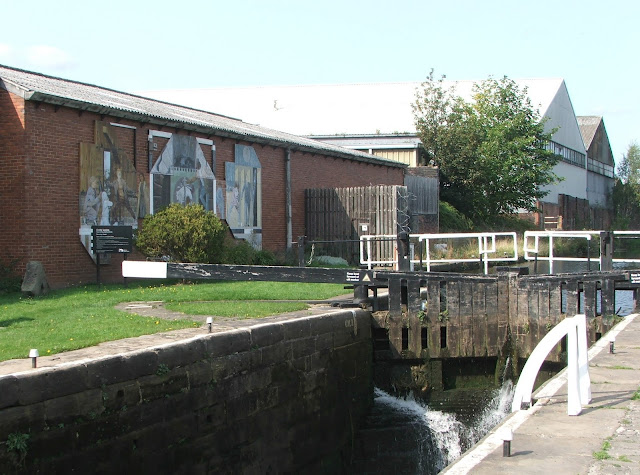 and the viaduct carrying the Leeds and Thirsk railway over the canal: 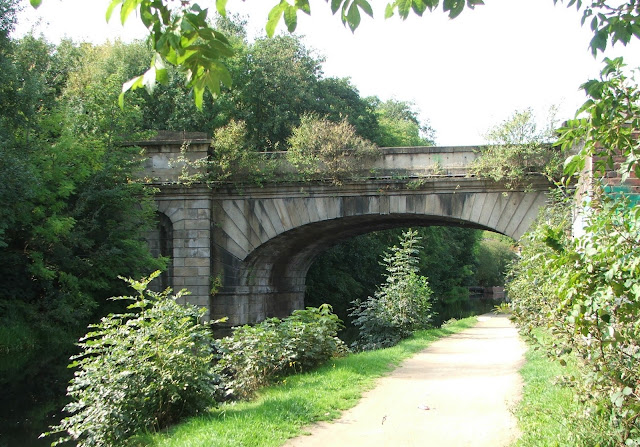 Although still close to the industrial areas of Leeds and Bradford, there is a quiet tranquility about the canal 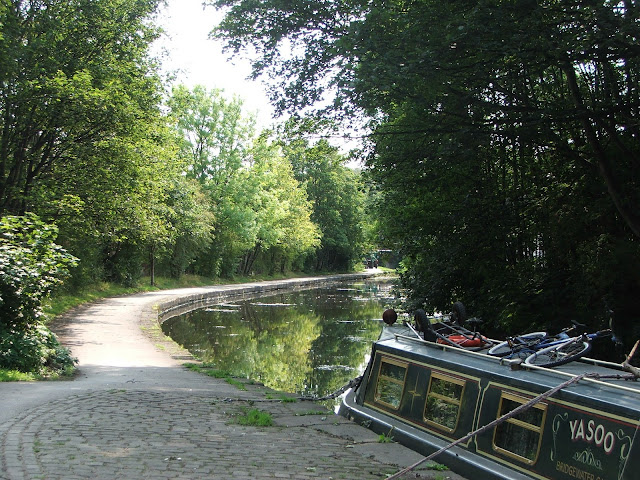 On then to Forge Locks: 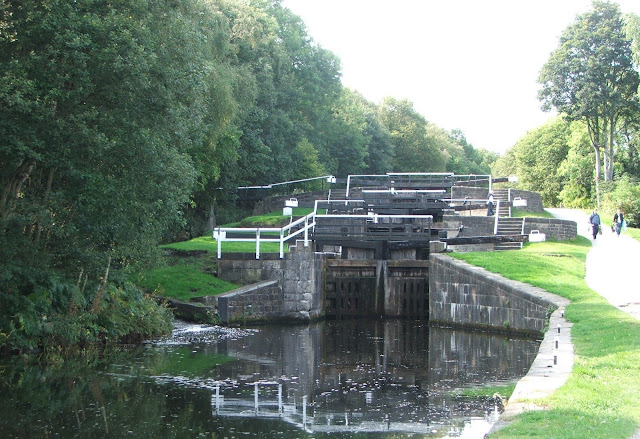 One of the amazing things about the Leeds and Bradford canal is the number of steep flights of locks.  This makes the canal towpath quite steep for cycling. There are three Forge Locks. 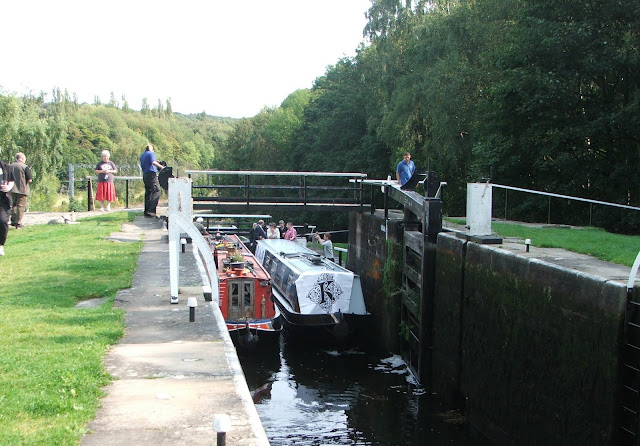 The barge on the right carries a party from Kirkstall brewery just a mile or two back.  A good time was being had by all - less of the "quiet tranquility"! 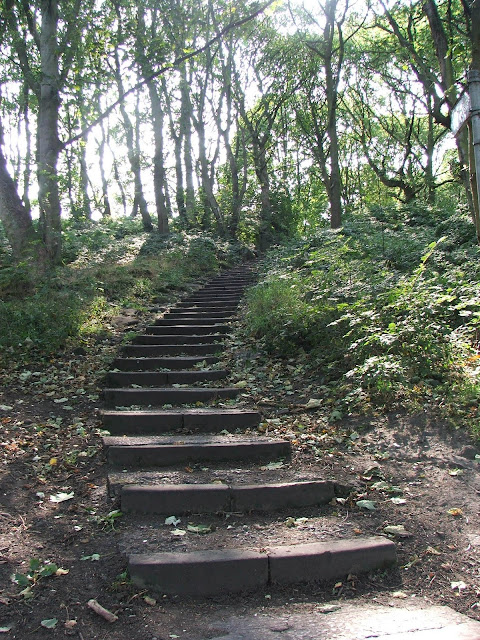 Some mysterious steps lead up and away from the locks!

Then on to Fallwood Marina: 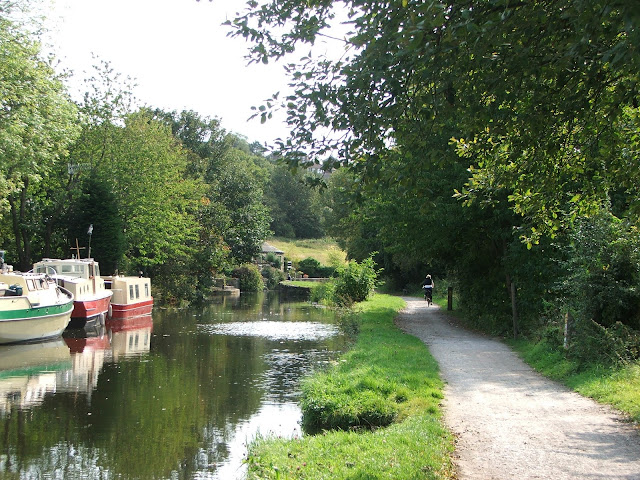 and just around the corner Whitecote House: 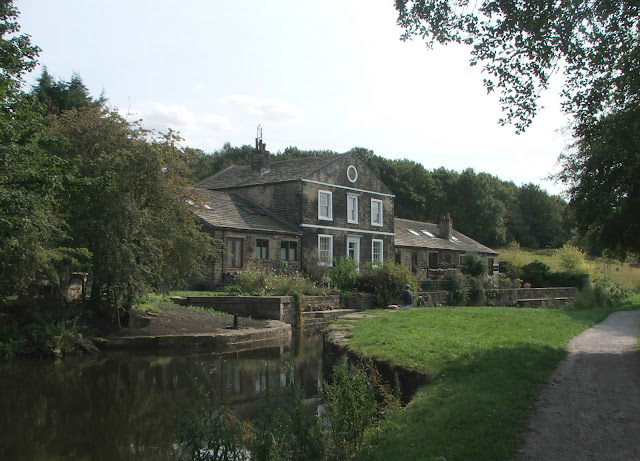 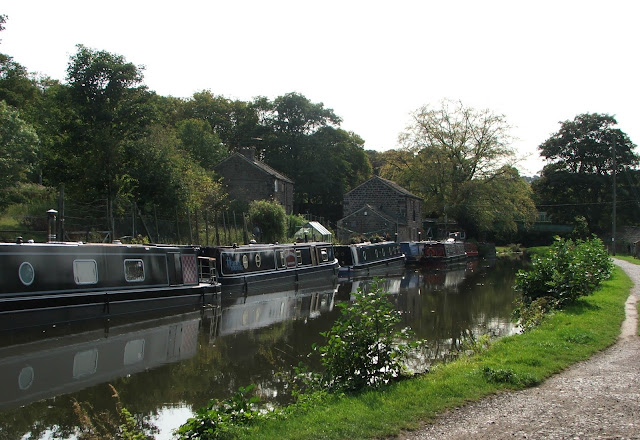 to Dobson Locks (two this time).  This is the view back to the Apperley Road bridge 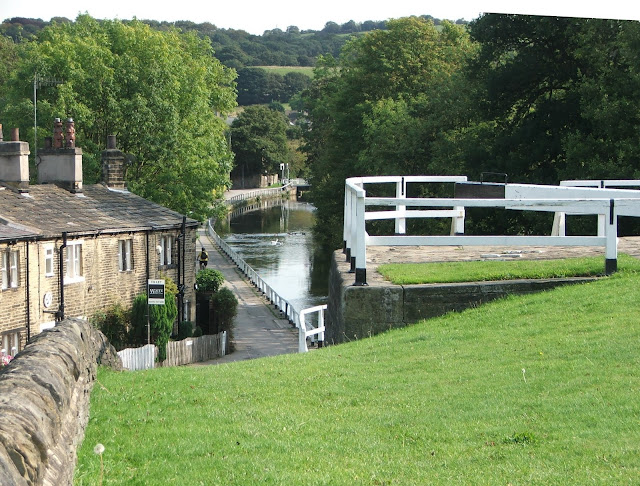 then on passed another serene canal scene 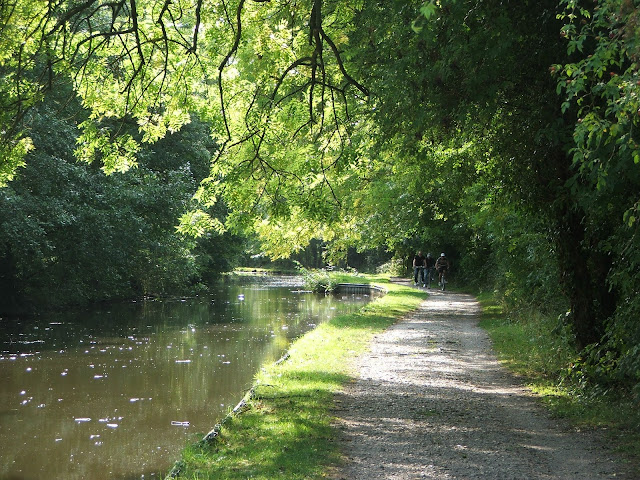 until we approach Saltaire 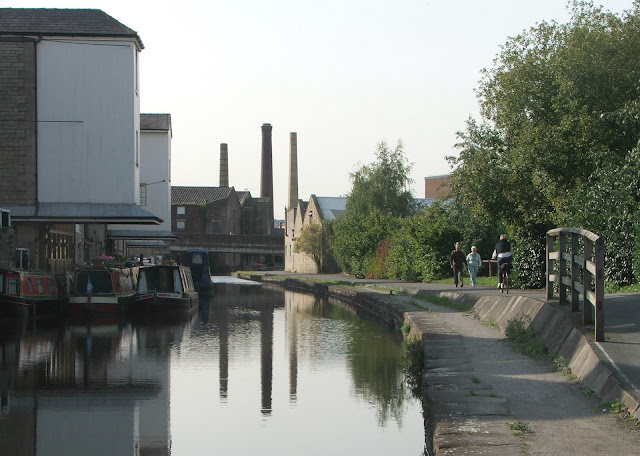 Some of the industrial sites now being transformed into visitor attractions 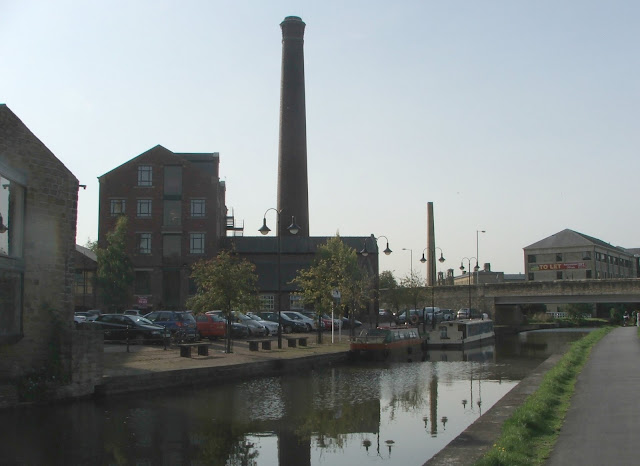 and then on to Salt Mill itself 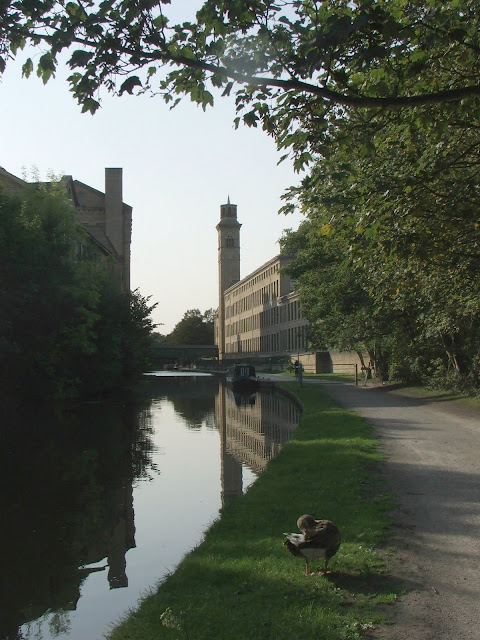 Approaching from the east, into the sun, gave these enormous buildings a quiet grandeur standing both sides of the canal. 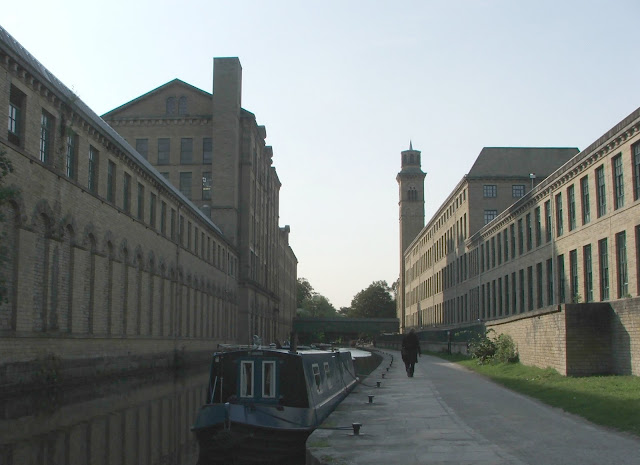 On another day we continued the journey westward, and up some even more remarkable flights of locks.

First we came to Hirst Lock - just one this time: 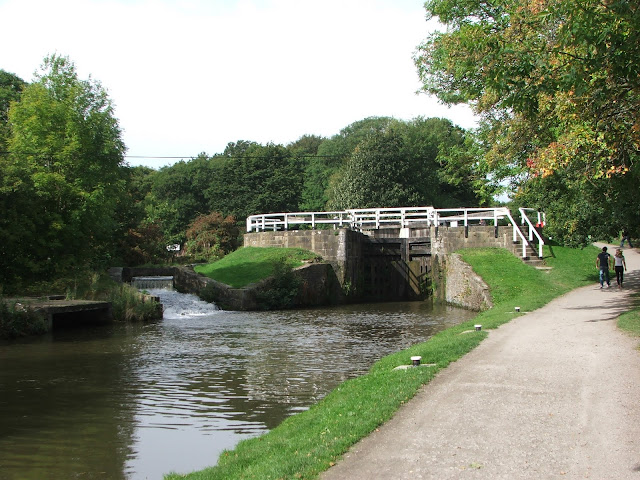 Then we crossed the river Aire on an Aqueduct (runners part of a Saltaire festival event): 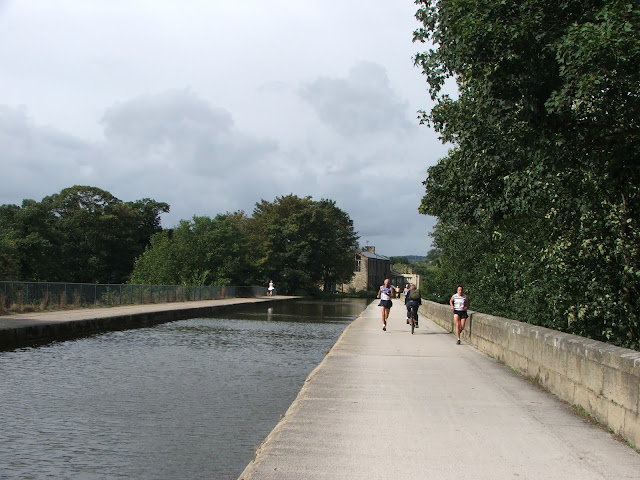 Then looking back with the river Aire below: 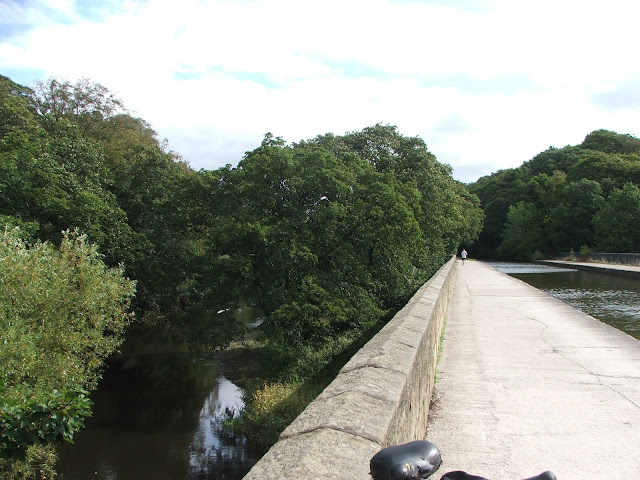 Then passed the Dowley rise locks (just 2) as viewed from the top: 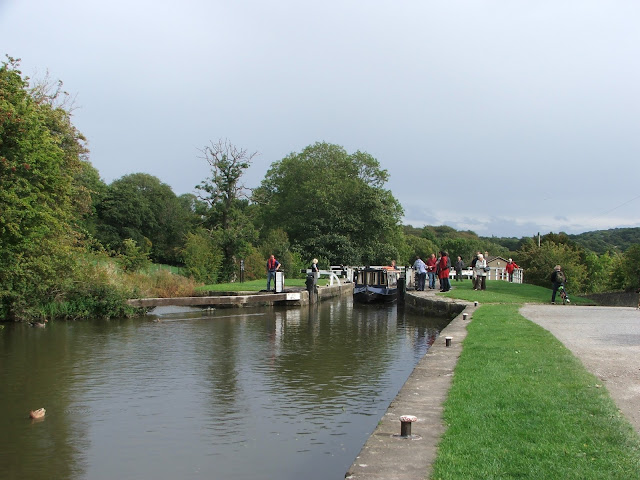 On through the town of Bingley where first there is a flight of 3 locks, then an amazing flight of 5: 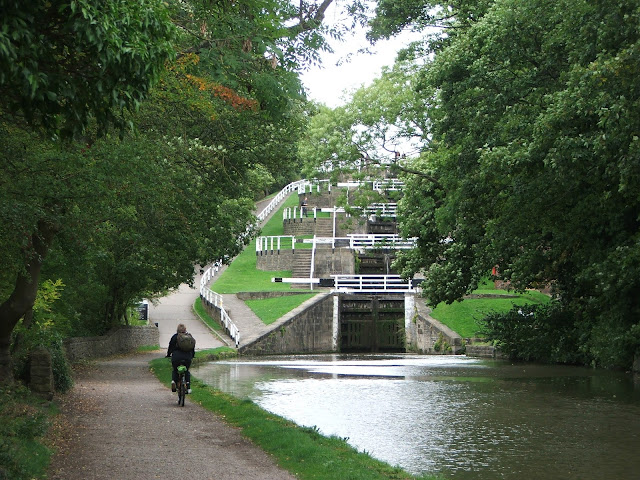 Any hopes that cycling along towpaths is easy are dashed.  It is not the number of locks that is amazing, it's their proximity to each other.  The gradient of the path ahead  means walking for most - it rises over 59 ft in a distance of 320ft ie 1 in 5 - the steepest set of locks in the UK.  I know the group of Caen Hill locks on the Kennet and Avon canal near Devizes in Wiltshire.  There, 29 locks are spread over 2 miles, and rise 237ft ie 1 in 44.  The water is controlled by having large pounds at the side of most locks.  At Bingley the water goes from one lock to the next, with only overflow channels from each lock to the canal below.  Not surpringly all barge movements are controlled by employed lockkeepers.  The present lockkeeper has an MBE for "Services to Inland Waterways in the North".

So some pictures from an exhausted cameraman at the top: 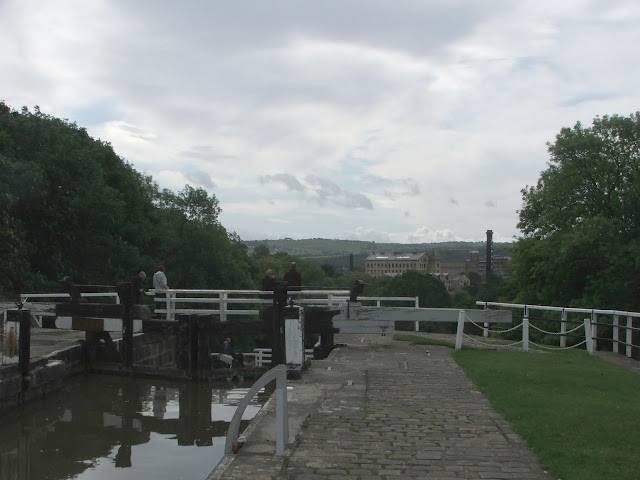 But here is a barge rising through the narrow locks: 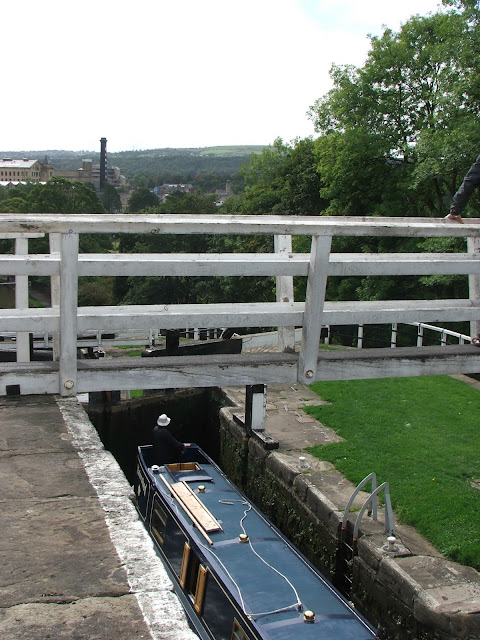 We went on to the National Trust property at Riddlestone Hall, which was fascinating: 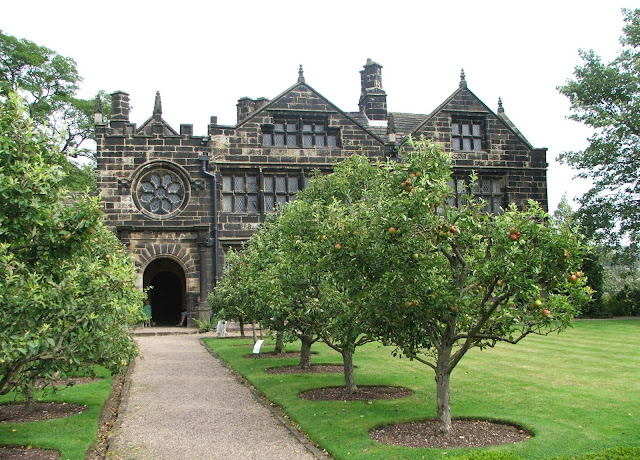 Then back along the canal to Saltaire 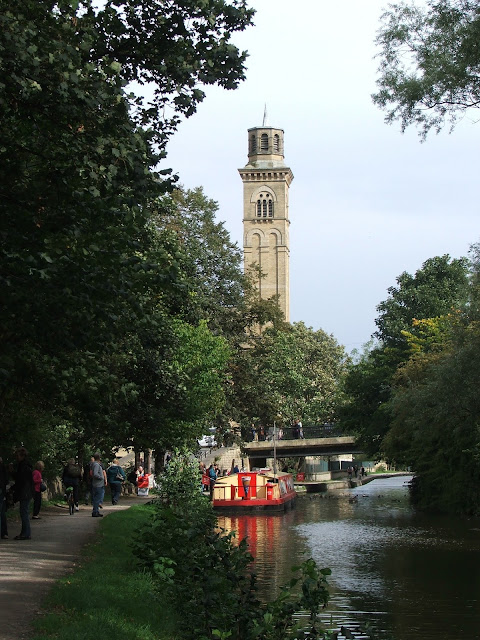 and home to George St - ours is the fourth house on the left.  Note the road across named "Titus Street" and the Congregational Chapel at the bottom of the hill: 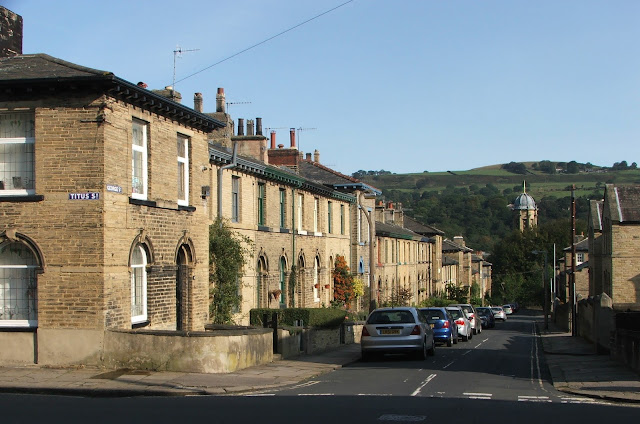 Pity that the 1850s made no provision for cars!


Thanks for looking.Hope you liked it.